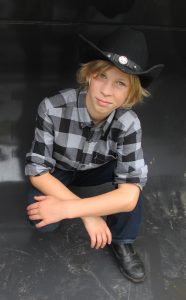 I would love to tell you a story about my son, the creator of this program.

Yes, you read that correctly, it was an 8 year old boy that created this company. This venture was born out of my special boy’s love for Minecraft, build challenges, and feedback from someone other than his mom on how his work stacked up.

I was a homeschool mother of 4, who was about to throw in the towel. At almost 8 years old, my son was still a “non-reader” and everyone was starting to use words like stupid, delayed, ADHD, and worse. Society had just about convinced me that I had failed and he would be better off in public school. I had become a slave to my curriculum and forgotten the joy of learning and the gift I had been given of forming my son’s spirit and love of knowledge.

Thankfully, summer arrived and we took some time off. A neighbor introduced Minecraft into our home and he was hooked. Owning an IT company, I immediately jumped in and hosted a server for him to play with his close group of friends.

All of the sudden, an amazing thing happened. It started like this…

“MOM (shouted across the house) come and tell me what Avery is saying to me”.

“I’M BUSY MAKING DINNER (shouted back from the kitchen), spell it to me.”

These types of interactions continued over the course of 3 weeks and suddenly they stopped. Realizing this at dinner one night I asked him, “Did all of your friends stop playing Minecraft?” To this he replied that 4 of them had been playing just that afternoon. “Well why don’t you try to read what they are typing anymore?”

This earned a baffled look and an eye roll. “MOM”, he said with a touch of exasperation, “I have been reading what they write forever!”

My son is reading?

And I didn’t’ teach him?

How did that happen?

I was perplexed and intrigued by this game that had taught him something in three weeks, where I had failed over the course of three years. My next move was to go out and buy myself an account and start playing on our server with him. I was instantly hooked. As we played, the joy flooded back into our relationship and he began to come alive again. His confidence in himself and his own intelligence was growing back as quickly as his love for the game had blossomed.

One day we were all playing on the server while sitting in my living room. (There are 4 computers in the room that serve as my office and the kids school workstations, but at that moment they were all filled with friends.)

“Mom, we need a challenge,” Xander declared as they all tried to decide what to build today.

“Well, how about the Statue of Liberty?”, I asked, since it was the first thing that popped into my head.

“The statue of WHO?”, was his smart reply.

This caused us to dive into a round of fun with Siri and soon 4 boys were fighting over the iPad as they tried to be the one to read the information out loud to the rest of us. After about 20 minutes of this silly study time, they were ready to build. The discussion quickly turned to whether lapis or diamond blocks were more appropriate. Four hours later, with much additional research into proportions and interior structure, the Statue of Liberty was standing proud on our server.

The story did not end there. That night at dinner, my usually quiet son gave his Dad a dissertation on all kinds of tidbits related to the Statue of Liberty. To the point that when the kids were finally all in bed, my husband asked, “What did you do to our son???” Well, this definitely had me thinking about the day’s experience.

Could we do it again?

How could I make sure that the fun and creativity were not lost in the learning?

Would he want to try another build challenge that required him to learn something of the history of the structure first?

That night as I lay awake thinking through all of this, I could hardly wait for the sun to come up, so I could casually ask if he had ever heard of the 7 Wonders of the Ancient World.

Finally, breakfast did arrive, and he listened to my casual question with interest. Then he proceeded to quiz Siri on the topic. Soon he was running out from the living room asking, “Mom, did you know that the pyramid was the first skyscraper?” He was hooked.

Sadly, the summer was almost over and his friends would all be returning to school. He was miserable that their grand plan to build all seven ancient wonders would go unfinished. So, in an effort to continue the momentum of learning and joy that we had built over the summer, I offered our local homeschool support group the opportunity to journey with us through the 7 Wonders of the Ancient world. I offered to provide the server and some study material for a small fee, and was flattered when 32 kids signed up.

We had the most wonderful time! Xander and I learned so much about Minecraft Servers (lots of fun stories in that statement for later), and about creative building in game. In the end, both the kids that we journeyed with through that first class and Xander himself all wanted more.

This led Xander and I to spend a fun afternoon at the library looking for a new topic. A book on castles and medieval warfare provided all of the inspiration he needed to request his next learning adventure, Castles and Cannons.

About this time, a strange thing started to happen. I received several emails from disgruntled parents that wanted to know why their child could not participate in the program, just because they didn’t live in the same city as we did….

We have a PROGRAM?

This is just a small server, with a co-op full of kids, journeying through some learning material together.

Well, trying to tell myself and everyone else that, lasted for about 1 week.
My husband suggested we put up a Facebook page just to see if others were interested in this idea. Xander clamored to know if his Castles class was ready yet, and the emails continued to pour in from friends of friends wanting to know why their kids couldn’t participate.

Xander put it best one night at dinner as we frantically tried to figure out what to do. “Mom, if all of these kids want to love learning too, then you have to teach them!”

And from that simple statement, GamED Academy as you know it today, was born.

We still have growing to do.

We still have lots to learn.

We still struggle every day to make sure that the joy of the kids stays central to the vision.

And we are thankful for all of you that have found our vision of joy-based learning and embraced it.

Thank you for journeying with us!